House of Toast is proud to announce that James (Jim) Lambert, our Northeastern Regional Vice President of Political Relations has been appointed to the President’s Corona Virus Task force.

“Jim will be a truly great addition to the team, he’s a great person, truly fabulous, and smart too.” said President Trump during the Friday Corona briefing. “We want to leverage Jim’s experiences in social distancing – he’s good at that, you know. Not many people know that about Jim, but I do. And he’ll be great at it.”

Jim will be working alongside Vice President Pence, US Global AIDS Coordinator, Deborah Brix, and Director of the National Institute of Allergy and Infectious Diseases, Dr. Anthony Fauci as well as the other notable members of the President’s task force.

More details to come as the situation evolves. Once again, this showcases the talent of our House of Toast Leadership team. Way to go Jim!

To our valued customers:

The last few weeks have transformed all of our lives in ways we could never have imagined. I wanted to take a moment to share some of the actions we’ve taken as a company in support of our customers, our partners and employees. We’ve spent 20 years bringing the joy of life to toast aficionado’s worldwide; we are now doing our best to navigate an unprecedented situation for all. Our commitment is to continue to communicate with you regularly on the actions we are taking during this very difficult period, until the food service industry can resume as normal. Thank you for the patience and trust you have shown so far.

As a result of the current conditions our dining rooms will remain closed for the foreseeable future. Locations with drive-through capability will continue to offer drive up services and operate normal business hours.

In the meantime, I want to inform you of the proactive steps we are taking to ensure the safety in our restaurants. Specifically, we are:

We are so grateful to our community and hope that you and your loved ones are safe and healthy. We will continue to serve you as our customers and partners – today and in the future – and look forward to all being able to come together again and experience the joy of delicious toast when the time is right.

Tom, Daphne, and the House of Toast Crew

Came into the office today and was surprised to find someone had left me a toastglobe. How nice!

But does Trump hate Toast? 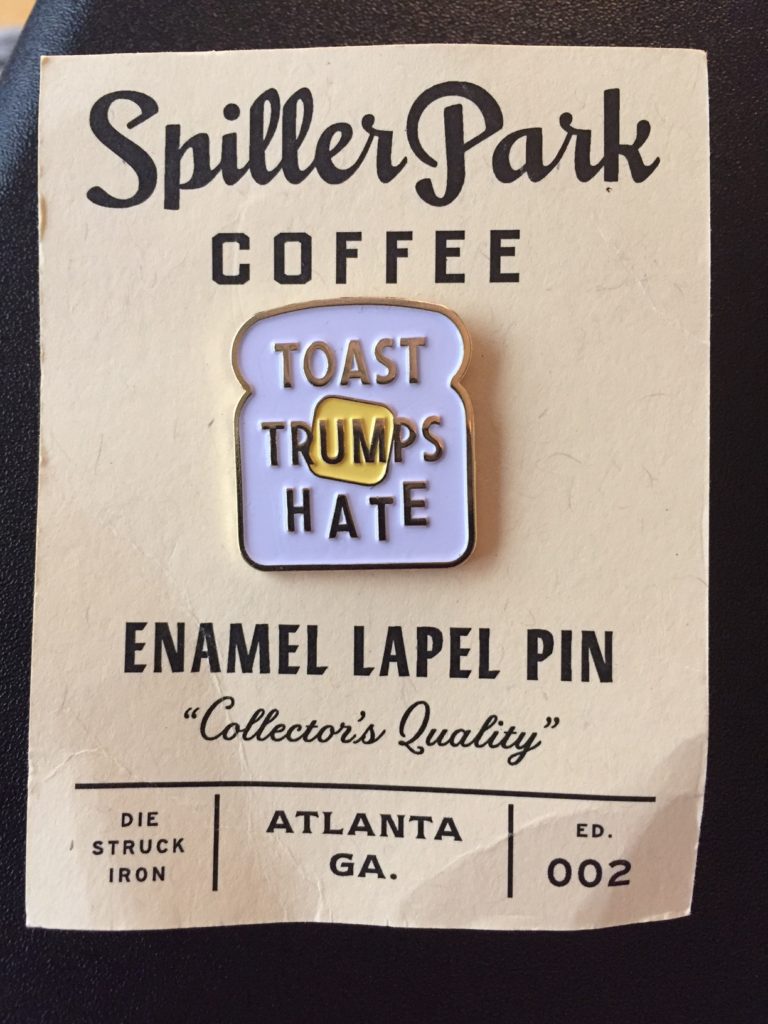 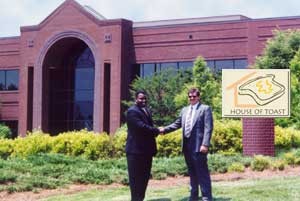 facility will house the majority of the company’s corporate staff as well as provide a centralized training facility for local and regional managers. “This is a huge step for us.”, says Tom Porter, Founder and COB, “Our previous building was only 100,000 square feet and we had people on top of people. This is really going to give us the room we need to grow and develop as a company – we’re extremely excited!.”

The new headquarters will also be home of “HOT-U”, the company’s centralized management training facility. This state-of-the-art facility will include 7 amphitheater-style training rooms all with full video conferencing and multi-media capabilities as well as 3 kitchen labs, a Toast-Hydration Simulator and a think-tank that’s actually shaped like a toaster. Completely automated security, lighting and climate control systems will also ensure individual safety/comfort as well as extreme energy efficiency.

According to Porter, the relocation of staff from the current facility to the new one should take about 45 days. The company plans to have everything complete by the end of the year.

After surviving 9 rounds of fast paced curling action, the House of Toast Curling team (led by David Flavell) has advanced to the final round of competition at the International Restaurant Owners Curling Championship. The team advanced after a narrow win against the Dutch team (who were sponsored in-part by the DeKater restaurant group www.dekater.com, and led by none other than Dirk Famularo).

“It was a close game all the way”, said Flavell, the teams Skip. We were in a sticky situation: Second end counting 5 rocks (opposition had 6th stone and Sage rink 7th) and 1 rock in front of the house with last rock to come (see diagram on left). Last rock called for an angle raise take-out with the shooter rolling in for the 8th counter. The diagram on the right shows the final position of all 8 rocks. The House of Toast team won 16-15, with odd eights against the wall.

The team now moves on to the final round of competition and according to Flavell, they plan to give the world champion Canadians (made up of members of the White Castle chain) a run for their money.

House of Toast is pleased to announce the opening of their first franchised restaurant in the United States. The store, located at 1256 Mendon Avenue in Cumberland, Rhode Island is owned and operated by the team of Kevin Jacques and Fred and Linda Jeffrey – otherwise known as J3 Enterprises.

Daphne Anderson, President and CEO said that the franchising approach, although new to House of Toast, is necessary to keep up with the increasing market demand for House of Toast products. “We’re excited about this additional opportunity to accelerate our growth”, Anderson stated, “J3 Enterprises was the hands-down choice when it came to deciding who would get the first franchise.”

A well known and respected team in the local restaurant business, the members of J3 Enterprises are admired by all for their keen business acumen and slick marketing skills. They opened their first restaurant, The Atomic Burrito in 1999 and went on to open 5 additional restaurants over the next 3 years. 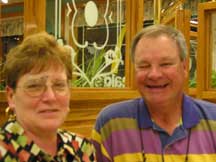 Speaking to a group of local reporters Kevin Jacques stated that House of Toast is the perfect compliment to their other restaurants. “Everyone knows us for our Atomic Burrito success, this is a great way for us to diversify and reach a broader segment of the market.” Linda and Fred couldn’t agree more, “We were looking for something to compliment our Atomic Burrito concept but didn’t want to have to start from scratch. Investing in a House of Toast franchise was a no-brainer for us – heck, we are probably their most active customers anyway!”

The Cumberland, Rhode Island store is one of the largest QSTs (quick service toastuaries) in the area and is also the first to showcase our Series-12 TDK (Toast Distribution Kiosk). By following the on-screen directions users can select from assorted type of bread, determine the breads re-hydrated thickness, establish toasting preference and then choose from a wide variety of spreads. An extremely elegant and well designed unit, the Series-12 will be introduced in all stores by the end of the year.

Congratulations Kevin, Linda and Fred from everyone at House of Toast!

After 18 months of exhaustive planning House of Toast is pleased to formally announce our expansion into the European market.

Our first European store will be built on what is currently the site of the Parthenon. The new store is scheduled to open towards the middle of 2016 and will seat up to 500 toast loving customers.

Ron Gastin, Senior VP of International Development coordinated the acquisition of this valuable piece of real estate and was on hand today to give locals and tourists alike a tour as we hoisted some temporary signage into place. 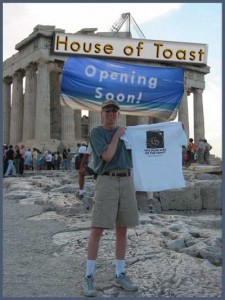 “House of Toast is pleased to be part of Greek (and world) history.” he said, “The building is in need of some minor repairs but we think we can get it fixed up pretty quickly. All it needs is a bit of spackle and some touch-up paint”

We will continue to post updates as news about our additional European locations become available for the public at large.

Ron Gastin, House of Toast Senior VP of International Development kicks off our European expansion initiative at the Parthenon as future customers line up for a tour of the soon-to-open facility.

House of Toast announced the release of the worlds first Toastumentary at a press conference in their new Atlanta headquarters. This mini-film is a slightly elongated version of a yet to be released commercial and is being made available via the internet to House of Toast fans around the globe.

The Toastumentary features an assortment of House of Toast employees and was produced by Tom Porter and Patrick Arkins. The two collaborated for over 30 minutes on the project and the filming was completed in less that 1 hour. “Post-production was the real challenge”, said Porter, “the quality of the material was so good that it was hard to decide what to leave on the cutting room floor.” Arkins was quick to agree, saying that he never realized that there was so much talent at House of Toast. “I mean, I know we make the best damn toast in town but who could of known that our staff would have such great camera presence!”

Portions of the film will be incorporated into the company’s newest series of commercials which are scheduled to start airing on Super Bowl Sunday. 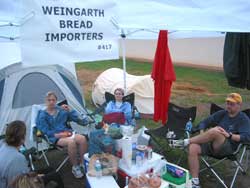 Showing their support for the local community, employees from House of Toast’s corporate office joined staff from Weingarth Bread Importers this past weekend to raise money for the American Cancer Society. The grim weather couldn’t dampen the spirits of the team as they walked through the night during this national fundraising event. 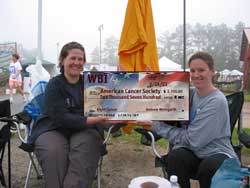 The highlight of the event was the presentation of a check for $3000 to the American Cancer Society by Beth Richards, Sr. VP of Operations at Weingarth Bread Importers and Mona Weatherspoon, Sr. VP of Marketing at House of Toast.

Funds were raised by gathering donations from friends, family and business associates. In addition, WBI and House of Toast, Inc. donated several items which were sold to other relay participants.